Glimpse of the Dragon Tour

Glimpse of the Dragon Tour

Glimpse of the Dragon Tour is the shortest trip that gives you an introduction to the religion, culture, people and the natural beauty of the Dragon Kingdom. The Kingdom of Bhutan is a landlocked country in South Asia at the eastern end of the Himalayas. Bhutan borders China to the north and India to the south, east, and west. To the west, it is separated from Nepal by the Indian state of Sikkim; farther south it is separated from Bangladesh by the Indian states of Assam and West Bengal. Bhutanâ€™s capital and largest city are Thimpu. Plan Holidays offers Glimpse of the Dragon Tour which is a new approach to sightseeing and understands Bhutan. This cultural tour through the mystical Western valleys of Bhutan is an ideal introduction to the Dragon Kingdom. This 4 days tour includes visiting highlights of Bhutan The Land of the Thunder Dragon , then breathtaking visit to central Bhutan , Paro Valley:The beautiful valley is home to many of Bhutan’s old monasteries and temples, then to eastern places like Bumthang Valley: This is one of the most spectacular valleys in Bhutan and also the heartland of Buddhism in Bhutan, Punakha: the old winter capital, Tashigang , Tashiyangtse , Trongsa & Mongar. Towering cliffs, Pristine forest, great variations in latitude &altitude & climate conditions are the eastern character. There is an animistic Bonpo tradition in this area which is a practice earlier than Buddhism came into existence. Explore Phobjikha valley and also visit Gangtey Monastery, the most important Nyingma Gomba in the country.

Enjoy Dangmechu river which is the largest river that flows in the eastern district. Trashigang town was a trading point with Tibet in the past. Visit Trashigang Dzong (1659), also termed as Sky Dzong overlooking Dangmechu river. Trashiyangtse has Chorten Kora , a Boudhanath Stupa of Nepal Modeled Chorten. Mongar Town is a settlement on top of the hill, main business place in eastern Bhutan, visit Mongar Dzong, newly built Dzong, Zhongar Dzong, Dramitse Lhakhang, AjaNey , the sacred site of a Rock. Visit some of the other villages in the area including Jambay, Kurjey and Thangbi Lhakhangs and the castle of the â€˜White Bird. In Trongsa visit Ta Dzong which is now a temple dedicated to the legendary Ling Gesar and stroll around the small town.An experienced English Speaking guide accompanies the trip from Arrival till Departure. Most famous landmark of Bhutan, Tigernest, the Takstang Monastery visit on foot is in the plan. You will visit the Dzongs, monasteries, and school of Thanka paintings. 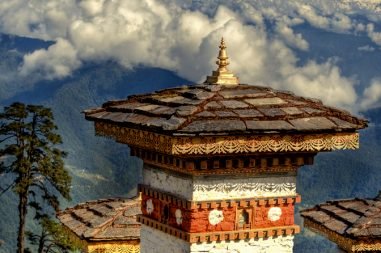 A Window to Bhutan

A Window to Bhutan The Kingdom of Bhutan is a landlocked country in South Asia at the eastern end of the Himalayas. 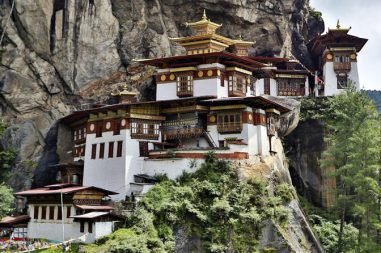 Bhutan Paro Tour is the experience of the breathtaking views of Mount Everest, Kanchenjunga and other Himalayan peaks including sacred Chomolhari.and Mt.