Get an aerial view of the Himalayas. They look entirely different from the views from the ground. Short compared to trekking to the Everest yet equally enticing and exhilarating, Mt. Everest Heli Tour is three stops package that will take you to Lukla, Kalapathar or Periche and at Gokyo Lake!

Mount Everest is a dream for almost every human soul but only a few gutsy ones attempt to scale it, some strong ones trek all the way to see it live in front of the eyes… And a very few fortunate ones take it to the next level and take on Heli tour to get the aerial perspective of the Himalayas.

Everest Heli tour will take you around the Himalayas, flying close to world’s tallest peak Mt. Everest, unfolding the Himalayas from the comfort of the helicopter. You will get to fly over Everest region, fly above Everest Base Camp and stop briefly at Kala Patthar (5550m), the most popular viewpoint in the region. Moreover enjoy breakfast at Shyangboche surrounded by Himalayan peaks, before flying back to Kathmandu.

As you hover above over 8000-meter peaks, you would be able to peek into the world of heavenly feeling, feasting your eyes on the frozen panorama. The view over Khumbu Glacier and Icefall is one to die for during the climbing season with vibrant colored tented camps of expedition groups fill the area. You will also get to step on the most popular viewpoint in Everest Region, the Kala Patthar that stands at 5550 m. During the shortstop at this point, you will have adequate time to take pictures and savor close-up views of Pumori, Nuptse, Lobuche and Mount Everest.

Our Everest Heli tour is just for you to enjoy every bit of second in the wonderful Khumbhu region, flexible and accumulating your choice. You can choose to combine short trekking with an exciting helicopter ride tour. It is the best way to trek past the charming Sherpa villages and majestic mountain views.  After trekking for some times you arrive at a place from where you board the helicopter and fly across the rising 8000 peaks before finally arriving in Lukla for your way back to Kathmandu.

The exotic Everest Heli tour begins from Kathmandu. We begin our short trip to Nepal by visiting Kathmandu’s UNESCO World Heritage Sites. We will get a bird’s eye view of the Capital city on the way to Lukla, the short stopover for refueling. Flying parallel to the Himalayan range we can see endless chains of frozen mountains. We then make a stopover at Kala Patthar which is the best viewpoint to admire the rare and up-close beauty of the mighty Himalayas including Everest. After spending some time at Kala Patthar, we fly to Gokyo Lakes which are a set of six lakes that form the world’s highest freshwater lake system. We land near the third lake which is referred to as ‘the Gokyo Lake’ and admire its tranquil beauty. We can see people including trekkers with backpacks moving like ants on trails cut deep on the mountainsides. Fly above Sherpa settlements, solitary yak herders’ camps and ancient monasteries. We then fly back to Kathmandu and end our Everest Heli-tour in Nepal.

Day 01: Arrival in Kathmandu
After landing at the Tribhuwan International Airport, you will be greeted by our representative and transfer to your respective hotel.
Day 02: Sightseeing in Kathmandu and Patan
Today we start of the day with the tour of Swayambhunath Stupa, also known as Monkey Temple, from where a panoramic view of Kathmandu city can be seen. Then, visit Boudhanath Stupa, Pashupatinath Temple. We will also visit the Hanuman Dhoka palace, Patan Durbar Square and Bhaktapur Durbar square. You can later go shopping for the preparation of the trek. Overnight at the hotel
Day 03: Helicopter tour
We leave our hotel and travel to the airport at six in the morning. After about an hour, we reach the base camp of Mt. Everest. We do not land here; however, flying over the base camp with dramatic aerial views of the Everest region is an awesome experience. We make a landing at Kala Patthar where we hop out of the chopper for about 10 - 15 minutes and admire the mighty Himalayas, Everest in particular. The helicopter will then take us to the beautiful Gokyo Lake. We stop there for a few minutes and admire its view up-close. Next, we fly back to Kathmandu.
Day 04: Final departure
Our Everest Helicopter Tour in Nepal ends today. Our representative will drop us off at the Tribhuwan International Airport 3 hours before the scheduled flight.

Best holiday destination indeed is also a dreamland for those seeking tranquility and peace into the heart of beautiful Annapurna Massif. Packed

The best holiday trekking of all, it is a dream of almost every adventure lover to trek into the heart of Annapurna 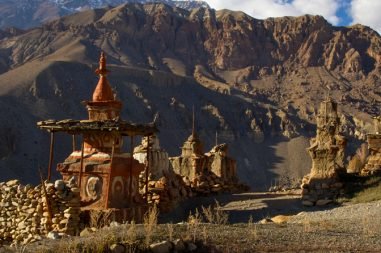